Aircell 5 Heatex is a five millimeters thin, flexible coaxial cable for the frequency range up to 10 GHz. The very low attenuation in relation to the diameter and the alternative usability of standard RG-58 coaxial connectors make this cable the first choice not only for wireless LAN but for many applications in telecommunications.

The relatively low attenuation of Aircell 5 Heatex is achieved by a low-loss PE-LLC dielectric with a gas content of over 70%. The material is also resistant to moisture. The solid core conductor of Aircell 5 Heatex is drawn from low-oxygen copper (OFC). In order to achieve good shielding and low losses, the external conductor of Aircell 5 Heatex is made of two layers of copper: on a thin, overlapping copper foil, a shielding braid with a coverage of 70% is applied. The film is PE-coated on the inside and thus protected against cracking if the bending radius is too small. The jacket of the cable is made of a halogen-free and flame retardant copolymer. Due to this Heatex jacket, the cable has a low fire load, low flame propagation, limited smoke emission and reduced production of toxic and corrosive gases. With the fire protection rating Cca Aircell 5 Heatex is approved for installation in public buildings. Aircell 5 Heatex is certified for railway applications for interior and exterior use according to requirement sets R15 and R16 of the EN45545-2 standard.

Due to its outer diameter of 5 mm, the Aircell 5 Heatex can be used with almost all commercially available coaxial connectors for 5 mm coaxial cables. Aircell 5 Heatex is a modern coaxial cable for many applications in telecommunications: it is relatively flexible, low-attenuation and anti-radiation. 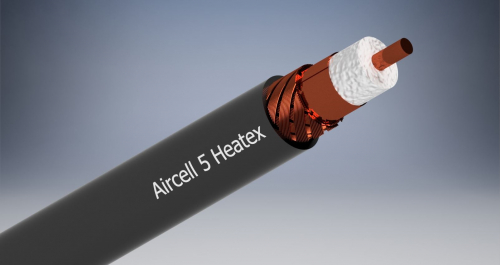